About a month ago I gave a piece of advice regarding how to start a conversation when out on the business mingling scene. Apparently, I had only given half the answer to the equation of how to best cope with this type of situation, as got several comments telling me the following: it wasn’t necessarily …

About a month ago I gave a piece of advice regarding how to start a conversation when out on the business mingling scene. Apparently, I had only given half the answer to the equation of how to best cope with this type of situation, as got several comments telling me the following: it wasn’t necessarily starting the conversation that was the problem, but rather finishing it that gave certain readers the shakes. They all asked in a sense, how do you end a small talk session with someone in a professional, polite way?

A timely question, as I will myself will soon be attending one of the region’s largest conferences that swings down our way every winter. It’s a day-long affair with speakers ranging from creative thinkers to top industrial leaders to the prime minister. There will be hundreds of people there, all filing en masse into the main auditorium for listening purposes and then heading out to the lobby at various intervals for speaking purposes, as it were.

Luckily, I’ve been there before, so know that it’s easy to observe all the people who know one another already – they gather in clusters and exchange banter easily while clutching their plates of tapas and glasses of mineral water, secure in the knowledge that they have a safe social place to land whenever a break arises. They also have an easy time of it ending their conversations because familiarity breeds a bit of –well, if not contempt, at least casualness, as they’re allowed to just give a vague ‘see you around’ when heading off to somewhere else. How easy it all appears to be for them.

But the truly brave participants here are those who start conversations with strangers, don’t you think? They take the plunge and ask someone a question, perhaps after reading the other person’s name tag to see where they work and what they do there. These two people talk awhile, at which point one or both will start to sense that their conversation is coming to a breaking point – so how to end it gracefully? This is what I was asked about – which in a way gives me renewed faith in human nature. Because what lies behind it is these people’s worry about not only being surface polite, but also their wanting to be respectful of the other person’s feelings when signaling that they (in truth) want to leave them and move on to a new conversation with a new conversational partner.

But am I exaggerating here? There are, after all, many people who have no problem dealing with this dilemma (staying and trying to hold life in a dying conversation or break off and risk making another person feel dismissed). Then again, as the readers’ comments show, there are many others who do: To them I would once again say that following a single tip will solve your problem and based on the old idea that ‘it’s not what you say, it’s how you say it’. So if you start sensing that your talking time is up, just look the other person in the eye and tell them in a sincere tone of voice something like, ‘Well, it’s been great meeting you. Good luck with [fill in something here], and I hope we’ll meet again sometime.’ That’ll do just fine. (And if this was someone you’d like to add to your business network, then you should ask them somewhere in your ‘closing speech’ if they’re on LinkedIn and if you can find them there and send a connection request. This is, by the way, the new digital business card that you should keep handy in your pocket for this type of occasion – but more about this some other time.)

Finally, please note the word ‘sincere’ above, which may just be the most important single word in this article. We talk about this word during my courses, and I’m always affected (but no longer surprised) by how strongly my course takers feel about how important it is to be – no, show – this personal quality when interacting with others. We all know what it makes us feel like to talk with a fake – another old saying about how ‘we don’t always remember what someone has said to us, but we do remember how they made us feel’ comes to mind. So don’t be that person – and if you don’t, you’ll sail through your own small talk sessions and increase your sphere of interesting people on whom you’ve made a positive first impression. Well done, you – take the victory into your next networking scene, and do it all over again. 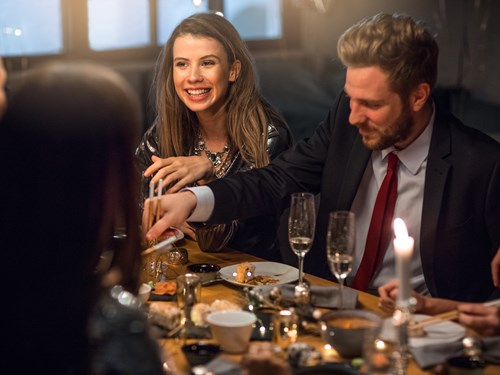 Will this year’s julebord* be the best ever?

Or do we actually not want to get together in person again? Organizational psychologist Karen Kollien Nygaard offers tips on how to navigate the up...