Networking Nerves: Is the Tip Included?

In the interest of following the current trend of writing advice in the form of tip lists, I’ll try to keep this introduction short and my ensuing list shorter still: A woman told me the other day about a conference she has coming up where the presentations given will all be in her line of …

In the interest of following the current trend of writing advice in the form of tip lists, I’ll try to keep this introduction short and my ensuing list shorter still:

A woman told me the other day about a conference she has coming up where the presentations given will all be in her line of work. ‘That’s terrific’, I replied, ‘sounds like you’ve got a great day to look forward to.’ But ‘No, not really’, she answered. The problem was that while she usually attended this type of event with at least one other co-worker, this time her boss wanted her to go on her own, as the topics covered were rather specialized and therefore relevant only to her field. ‘What will I do?’, she asked. Do? ‘What if I don’t know anyone there, what will I do during the breaks?’ It turned out she was dreading the thought of having to roam around among strangers for fifteen minutes. This dread was caused by three things 1) her awareness that since she was at a trade conference she should be networking with others there 2) her awareness of feeling almost fearful about having to do just this and 3) the guilt and embarrassment of knowing that she as a professional adult should be more than up to this ‘task’ of making conversation with people she didn’t know.

The list of tips to help this type of insecurity is really no list at all, just a singular piece of advice that could be taken from, oh, Shakespeare’s Lady Macbeth, who told her wimpy husband: ‘We fail! But screw your courage to the sticking place, and we’ll not fail.’ Granted, the woman was talking about regicide and not mingling at a work-related function, but the idea still holds. You will fail if you do not find the courage within to do this one-point list:

That’s it? That’s it. To illustrate in the above case, use one of the easiest open-ended questions in the world and ask it of the person standing behind you in the coffee line: ‘So, what did you think of that last presentation?’ And you’re in business! Aren’t you? Everyone has some opinion of what they’ve just seen and heard, and even if you are so unlucky to have asked a person who has trouble expressing themselves using a lot of words, at least it’s a conversational start. To be followed by you sticking your hand out and saying something like, ‘Hi, I’m ___ from___. I work with ____’ etc. etc.

The good news here is that it is one tip, and…there really is no bad news. Follow it and you will be rewarded. But so many people think that following this easy piece of advice seems to come so much more easily to others than it does to them. Not at all! If only they knew how the opposite was true – that actually everyone struggles with social anxiety in some area of their lives, work-related or not.

Are you a shy person? Many automatically answer ‘yes’ without thinking, but what they really should say is ‘yes, depending on the setting’. For instance, isn’t it a given that none of us are shy when hanging out with friends? Well, being alone among strangers in a networking situation isn’t exactly fun for anybody, either. Anybody. And yet those who succeed in – at the very least -enjoying those 15-minute breaks between sessions are the individuals who first find their courageous sticking place and then ask questions of others in the room.

Will they grow their business network? Who knows? The most important thing is they’ve made a good start at growing their ability to deal with a real life situation that had previously made them feel small and alone, turning it through sheer willpower into an opportunity to feel a part of whatever is going on in whatever conference lobby/hotel lobby/ room they find themselves in. No question about it; the tip is included, and following it will make you feel so as well. 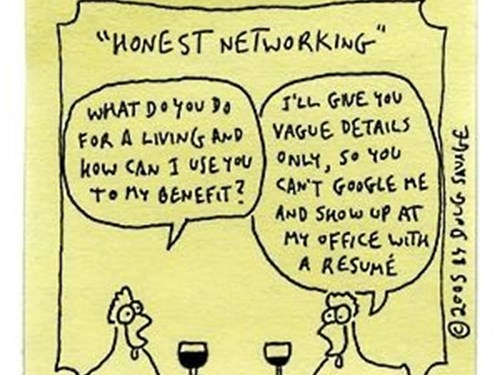 About a month ago I gave a piece of advice regarding how to start a conversation when out on the business mingling scene. Apparently, I had only given...