Hi there, it seems like you are using an outdated browser. Vi highly recommend that you are using the latest version of your browser. Tekna.no supports Edge, Firefox, Google Chrome, Safari and Opera, among others. If you are not able to update your browser to the latest version, other browsers are available here: http://browsehappy.com
Go directly to content
Photo: Getty images

Working in a low-context environment

Have you heard the one about the Norwegian husband who loved his wife so much, he almost told her?

This old joke brings a smile to many faces, Norwegians and non-Norwegians alike.

Why is this so? Perhaps because as silly as it is on the surface, the joke has a kernel of truth that touches on what’s often been called the ‘reserved’ Norwegian communication style.

This style can be seen not only outside of the workplace but inside it as well.

But ‘reserved’ as compared with what, exactly?

Researchers have long been at work trying to explain and classify how businesspeople across the globe communicate differently with one another, which turned into an academic field of study called intercultural communication.

For instance, in 1959 one of ‘int com’s’ founders, American anthropologist Edward Hall, introduced the concept of high-context and low-context cultures. Or what could also be called expressive versus reserved cultures.

According to Hall, high-context/expressive cultures are largely comprised of people who express themselves enthusiastically, using many words to do so in a lively way. They gesture a lot and often make direct eye contact with others. High-context people might also touch others more frequently, moving in for a handshake or a hug with ease.

In contrast, low-context/reserved cultures are largely comprised of people who express themselves cautiously, using few words to do so in a subdued way. They gesture little and often make indirect eye contact with others. Low-context people might also touch others less frequently, being comfortable with a handshake but avoiding a hug.

The upside of being reserved

So given that Norway is categorized as ticking the low-context cultural box, how might Norwegians explain some positive sides of being reserved?

And given that there’s a large number of foreign-born people working in Norway (according to Statistics Norway, 67.1% of the immigrant population was working in the last quarter of 2019), the assumption can be made that at least some of them come from high-context countries.

How can they best get along in their new, reserved work culture?

Ideally, every workplace would actively promote meeting places where their employees – Norwegian and non-Norwegian alike – would get together to talk about their communication differences, dividing up the issues in the following way:

Results from these discussions could then be summarized and distributed throughout workplaces to promote better and closer relationships among the employees. Although as the following example shows, sometimes employee closeness can grow all on its own despite perhaps having a preconceived idea of what a Norwegian workplace might be like. Having worked previously in Croatia, Serbia and the UK, senior engineer at Vard Engineering Brevik and Tekna member Milos Balunovic was used to high-context, more expressive work environments.  So he had a positive, if somewhat surprising, experience after moving to low-context Norway and starting out at his new workplace. He explainsthat on his first day of meeting new colleagues and ‘after the important [work-related] stuff was overthey  progressed to introducing themselves  and getting to know each other more.

– It was a much deeper conversation than how the weather was (no “chit chat”This communication style actually fits me well as I really don’t like small talk, says Balunovic

The lesson here? That low- and high-context communicators can get along just fine if they make an effort to do so, as Balunovic tells about the positive development that followed:

– We’ve established a “Micky Mouse Club” where we “force” the topics that are not work or task-related. When we’re at these “meetings” (i.e. coffee break), we usually discuss different matters that are industry-related, or any general topics where we share our opinion, views, etc. We exchange ideas, too, he explains.

Which all sounds like even though foreign-born workers and their Norwegian counterparts might be initially used to different communication styles, they can come together and talk (a little or a lot) about all kinds of topics – increasing not only their happiness level at work but also that of their supervisors, and in many cases owners.

Why is this happy feeling important? Quite simple, really, as according to Oxford University researchers, happier people do a better job. Their study at a British call center found that happy employees worked faster and more productively, increasing their sales in comparison with their unhappier co-workers. Interestingly, they didn’t put in more time, either, just used the time they had at work better.

So whatever communication styles Norwegian and non-Norwegian workers have – high, low, expressive, reserved – they all need to understand that in many cases there’s not necessarily any right or wrong way of communicating at work.

That being said, there is the need for everyone involved to make an effort to learn about where others at work are coming from on the communication front. Because for better or worse, it’s a relationship, one where being a silent husband won’t ‘work’ for anyone, will it? 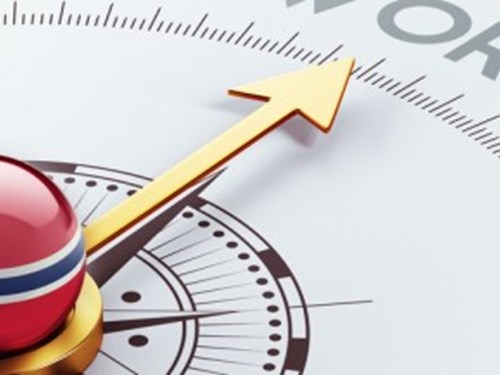